How smart and install location

Firstly, this looks a nice project, so well played all of you.

Anyway, I have a boiler that’s pretty new, but not combi, at the end of the kitchen.

I have a control panel at the other end of the kitchen for it, made by Drayton it says. I then have a thermostat/dial in the bedroom, which seemed a bit weird.

Where does the HestiaPI go in this set up? Does it replace both of the old bits of kit?

Also, how smart is the HestiaPI? Does it learn when you’re in the house and that sort of thing like the NEST, or is it just a connected on/off switch?

First off, welcome to the club

Does it replace both of the old bits of kit?

It can replace both but it depends on the wiring. If it uses standard wiring then it is possible. If it uses something proprietary, we need to look into it .
Can you find somewhere an electrical diagram that explains how these 2 devices are wired?
If you need a control interface on both kitchen and bedroom you can use 2 HestiaPi paired with each other or you can flush-mount a tablet on the wall and save 1 HestiaPi.

Also, how smart is the HestiaPI?

Presence is only possible via the Bluetooth of your phone in our coming model but this will not be included in the first release. Here is the latest list of supported features today. New features are continuously added but please post here any ideas you would like to see to help us keep track.

Sorry, long time replying. Thanks for the info. I looked on duckduckgo, and found this with a bit of info about the programming unit in the kitchen, its a Drayton Tempus 7.

The boiler is a Viesman Vitodens 100, which is pretty new. I know when they upgraded that, they had to run a new cable upstairs for something or other. I just looked where it goes, and it goes into some kind of junction box in the airing cupboard, with a few other 1mm/2.5mm mains cables coming into it. One cable goes off from there to a Drayton zone valve actuator, which is sitting on top of a pipe near the hot water tank.

That PDF I listed shows these headings in a table …

Earth Neutral Live H/W off C/H off H/W on C/H on, and under my model, it just says 1,2,3,4. Is it one core for each function and negative applied or something like that?

For the presence, I work with burglar alarms. I was wondering about taking information from that to help. The alarm could tell the Pi if the system is set. It could also feasibly tell it if there’s movement in a given room.

Is it one core for each function and negative applied or something like that?

We would expect L or another lower voltage to be connected to each contact depending on its state (if heating is OFF, C/H off should be high, if heating is ON, C/H on should be high) but please confirm that with a multimeter running all possible scenarios. If the above assumption is true, HestiaPi can support it with a slight modification.

The alarm could tell the Pi if the system is set.

I doubt the alarm system has an open protocol. The most elegant way would to build another gateway that taps on the terminal blocks and communicates with RasPi. 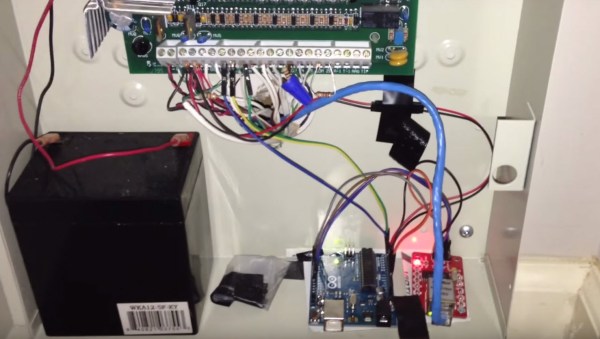 Upgrading Your Alarm System With An Arduino

When [Doug] moved into his new house, he found an old alarm panel set up — but it had no monitoring service any more. Not wanting to pay a monthly fee to have it setup, he decided to try inte…

Sounds very complicated but if you know some basic electronics you can use an ESP like NodeMCU (with some sort of isolation from the alarm system) that connects to yout WiFi and broadcasts via MQTT the status of each contact you are interested in. Im sure the presense state from the IR sensors in each room ends up in a contact in the main alarm box.
Would you be interested in working together towards a similar solution for your needs?

That actually shows the wiring diagram i have. Is this enough to know if this will work?

I looked at it but I cannot tell if the panel needs the relays in Normally-Open (NO), Normally-Closed (NC) or both states. HestiaPi support both but only one at a time and only the NO are used by default.
Sorry I cannot be of much help here

Yeah, I see what you mean. It does seem to suggest you need both at the same time, and it switches from one to the other. It surely can’t be though, that’d be daft … I hope. Is it just saying it can control the boiler either NO or NC, and that it supports both just like you do?

I think I’ll order a Hestia and try this. Last question, what the difference between the two versions on the shop, the HVAC and the cheaper one without?

what the difference between the two versions on the shop, the HVAC and the cheaper one without?

I think I need the one with two relays then, but now I’ve got the choice of EU and US. Which do I want for England/UK?

You would need the EU from this.