Looking at my install options for mounting my recently received US HestiaPi I could easily mount the thermostat on or near the furnace and extend the cables to the temp sensor from six inches to eight feet to put just the sensor on the wall upstairs, and put the thermostat in the basement where I don’t care what the case looks like. The sensor would be in a small but ventilated case painted to match the wall for the best appearance package I can come up with. I would use CAT6 for the run, because I have it handy.

My furnace is directly below the thermostat and I would use my PC or phone to control it all cases anyway, so I don’t see a downside to this. The only question is if that line is sensitive to that length or interference in some way. Considering it is right next to the AC in terminals presently it must not be very sensitive to AC.

I had asked the chief about this and he pointed me to https://www.raspberrypi.org/forums/viewtopic.php?t=82049#p580616
and the general idea is, a few meters, but you can get fancy with circuits and what not to make it longer. I am inside a few meters so I expect to be able to get away with it. I will wire it up first before installing it all. As always with twisted pair it pays to get the right stuff together. The general guideline seems to be put SDL and SDA on two different twisted pairs, and run a ground on the twisted mate. Power on their own pair. So in our application I would use 6 of the 8 wires, pair 1 SDA GND, pair2 SDC GND, pair3 Vin Vin. That combination should give me the best range without extra circuits. Any thoughts?

I like to keep all the electronics down in the basement to create the most minimal feel upstairs. All of my computers are in the basement, but the monitors and keyboards are upstairs, with USB and HDMI run to wall plates upstairs. It looks nicer that way.

From the tests we run on new boards, we saw no issues with the sensor being that close to the AC. The problem though is not the proximity but the length of the cable (and its insulation type) and the parallel run with “noisy” wires that are prone to spikes and interference.
Personally, as it is a problem with many unknown factors (house, wiring, materials of drywall/brick/cabling/etc) I would only be happy if I would test it myself in the house. If its not a big hassle connect the length of the wire you want initially outside the wall and if you get consistent reads then temporarily pass the wire where it would end up and try again. The sensor is “plug and play” so you don’t need to power down HestiaPi or reboot between connects/disconnects.
Your PC house setup sounds cool (although I don’t want to think about troubleshooting). Share some photos

Troubleshooting systems can involve running up and down the stairs. The keyboards that are remote from the systems all have power, sleep, and wake buttons on them, which helps out when they work properly. I do have a desk downstairs so if I get really deep into it I plug the broken system in to one of my monitors and hook up a all in one wireless keyboard and mouse to control it. 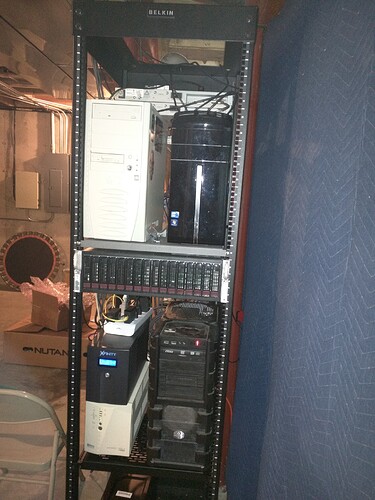 My “desktop” is the 3U rackmount server in the middle of the picture. Switches and router are in the upper back of the rack. Two UPS and a remote controlled power strip on the lower left. With that I schedule when the internet is on or off for my kids, along with control the power to their desktops if they don’t want to do what they are supposed to.

Sounds like SDC and SDA are both digital lines, so noise injection, resistance, and voltage drop are less of an issue, but wire capacitance becomes more of an issue. Cat 6 is well built for high frequency digital signals so it should be better at this task than most dupont cables.

I ordered Dupont connectors and a set of crimpers so I can built the cable and test it in the near future.

Any updates on this?

I have been a bit busy with pesky work getting in the way of my fun.

My wife decided she didn’t want the awesome minimalist implementation, she wants an actual boring looking box mounted to the wall! The insanity! So this idea has been killed by a woman who wants practicality over appearance. Very strange she is.