From the documentation of the link you sent I see these actions needed:
Configuration:

For troubleshooting use your laptop and do that:
Confirm by subscribing from another laptop to all (#) MQTT IDs and listen for published messages while you play with your HestiaPi:

Yeah tried that… nothing reports back except this:

Basically what was supposed to happen here was there was myself and another guy he was the programmer… i have only been learning js for about 5 months now… so I have no clue about mqtt and guessing in this case just isn’t going to cut it… at any rate he bailed out and I’m on my own trying to figure this all out… and honestly I feel a bit overwhelmed by this. I hear ‘it’s not that hard’ but when you have no idea what you’re doing it is that hard…

I do appreciate your input. 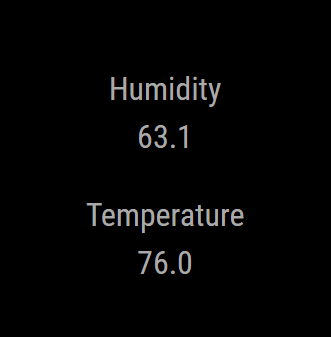 What you describe is not standard MQTT method. MQTT has single topics for each variable you want to get. Not multiple values squeezed in one topic. So the Magic Mirror (if it wants to get more than 1 parameter like temp and humidity) should be able to support a list of topics that you want to display. So is the screenshot you attached data that you actually got off HestiaPi and displayed on the MM?
Once its done, a proper picture with the installation and the frame on the wall is a must!
Well done

Once I get all done I will be happy to give a proper picture and how I did it of course.
[Of course I did a little math.round to get the numbers but I don’t like the 30.3 kinda numbers ;)]

this means show the dot and 1 floating point, as in 1 decimal point. Does MM support the “modulo” operator to get rid even of the .0 shown in your image?

It’s JS so this is probably the method…

I will ask about modulo… that just makes MUCH more sense!!

Here’s another thought I had…

I would have to create a new sitemap as I’d only want certain elements … I tested it and it works actually great!!

It’s taking a big shortcut but it does work… My thought was until I can find a better way to manipulate the data [better js skills ;)] then this would give me what I want and I’d have time to write my own thing.

I couldn’t agree with you more!! The more I really thought about it today the more I came to that conclusion because I cannot change the colors etc…

For changing the temperature.

Tried to use the # as the wildcard for topic but it won’t return anything because for some reason it’s not returning the in/out stuff…just the out stuff.

These are the only two values that will return:

Thanks again for all the help and I really wanted to bring this to MM but I’m not the person that has the ability to do that…hopefully someone will.

If there is another member of the MM community that could get in contact with us we would be glad to assist. Unfortunately we don’t have the capacity to implement this customisation due to limited time this busy period of the year but also due to lacking a Magic Mirror hardware installation in our lab.
If time permits we will try to help ASAP in the future.

+1 - building a magic mirror is on my todo, but it’s way down the list. Won’t get to it until next year at least

I am in exactly the same place with Greg on MM. Just need to get some free time…

I do have one built with a PI and while it’s okay I needed more sooooooooo I also built a 32" version with a mini-ITX and a real SSD… MUCH faster and that is more inline and gives the power really needed.

MY one last hope happened yesterday… I finally found someone who was interested in helping push this along… sooo my hope is I have a legit programmer working on this… to me at this point it’s like Spanish… I can see, read and understand it but know very little about it LOL

To me I’m a few months into learning js and honestly PHP is much better for me… but… everyone kept saying JS is easier… well okay then… My education is in education, not programming. In hindsight I wish I had followed my heart because it was in programming… but I was ‘pushed’ in another direction… and as it is there are NO local classes I can take so this has been a self taught thing…painful as it’s been.

Right now where I was stuck was I could only see temp and humidity and I couldn’t get anything else to report back… like changing the temp.

I was printing the case

Yes, but it was the printer that went belly up not due to printing the case… apparently so I found out it is common with this printer…

Why is it when I subscribe to a topic it only returns 2 items?

Should return all topics…but it only returns Temp and Humidity…

“There is no such thing as stupid question”

The reason why you only see Temp and Humidity returning is because MQTT is like a radio tuned to a station. You only listen to people talking. While you are subscribed to a topic (or all topics /#) only Temp and Humidity changes occur and get broadcast. I guess if you select any button like Increase Setpoint you will see it arriving at hestia/local/#.

The reason why you only see Temp and Humidity returning is because MQTT is like a radio tuned to a station. You only listen to people talking. While you are subscribed to a topic (or all topics /#) only Temp and Humidity changes occur and get broadcast. I guess if you select any button like Increase Setpoint you will see it arriving at hestia/local/#.