For Sale HestiaPi touch in the US

Do HestiaPi Touches hook up to US 24V systems?

Here is a thread that you can read: I believe it does

Hello Everyone, I'm looking at the Touch guide and Circuit image and wonder how this would translate what is used in the U.S. My heating/cool (no hot water) unit has the following wires: Green: Fan White: Heat Yellow: Air Conditioning Red: RH/RC Red heat/Red cool (24AVC) Blue: "common" wire. Enables continuous power flow from the Red wire. Thanks, John

How much current does the HestiaPI Touch draw? Could probably make a cheap step-up circuit to power it off the 24v.

Everything you need minus the case. Save some money by 3D printing the case yourself. You can find all files in the Downloads section. This release is targeted at makers and early adopters! Please …

I am considering purchasing one of these, I work for a company that has ecobees but I do not want the close source tech running my house.

I can run the power, but does this unit work with a US two stage furnace? Also, does it work with US HVAC yet? Should I consult HVAC guy?

Also, is it stable? It would suck if my heat stopped working because of a kernel crash.

Can you help us describing what it actually needs? What are the electrical requirements from the thermostat? We have designed and given our HVAC to pilot users with no serious issues reported back and we would like to have it published a month ago but we got too busy.
We are very close in releasing it but if 2-stage furnace is something easy we can add maybe you will get it included!

Also, is it stable?

Well, you could search this forum for stability issues, but I can tell you will find none

Well since you ask:

This is the furnace I have: http://www.amanadealer.com/product.sc?productId=359 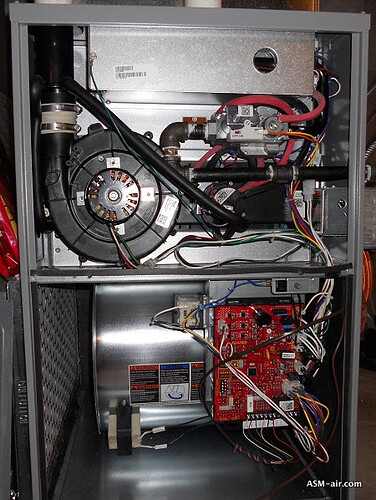 What is a Two Stage Furnace, and is it Right For You?

What is a two stage furnace and is it worth the money? This article explains what it is, how it works and the benefits of buying a two-stage furnace.

A two-stage furnace works by using a different set of programming than a normal one-stage furnace. Simply put, when it is only moderately cold inside, then the furnace’s control board opens the fuel control valve to the partially open position, and heats the house to the desired temperature before turning off. If the house is cooling a lot quicker than normal, for instance on a miserably cold day in the dead of winter, then the control panel opens the valve to the full open position, where the furnace runs full blast to heat your home.

How does your furnace do this? Well much of the technology is proprietary, but the gist of it is that the position of your valve is based on how often the thermostat is kicking your furnace on and off, and the difference between the temperature set on the thermostat and the actual temperature of the house. If it is only moderately cold, for instance, then this would not require a full open position on the furnace. You can kind of think of the operation of a two stage furnace as being kind of like the gas pedal in your car. If you are driving on the Autobahn in Germany, then you will probably need to floor the gas pedal. However, you don’t need to floor it when you are driving through the suburbs of Santa Clarita, California (although it seems as though people still do sometimes). Just like your gas pedal, a two stage furnace can vary the amount of fuel that is used.

This is the first house I have owned that has one, but the ecobees can track which stage is on or off, I think the furnace/HVAC unit (if it was two stage) controls the rest. It is a type of heater.

will you be able to follow up on that?

The two stage thermostat is well explained here: https://www.youtube.com/watch?v=4qW4ZF0Yikc
So basically, the “old way” is that if the temperature differential is “high” (or temperature continues to drop after the first stage has been engaged for some time) then the second stage would kick in and give higher BTU until the temperature differential is smaller. You can have two or even three stages for heat and two for A/C - three stages is only in ultramodern systems and there are few after-market thermostats with three stages as far as I am aware (maybe Nest).

Most controllers in a two stage furnace will work with non-specialized thermostats and kick in secondary stages of heat if the first stages are continuously cycling or running for long times.

There is a difference between heat pumps with auxiliary heat and valve-based heating systems. They’re both two stage, heat pumps will eventually heat the house but if it’s really cold outside it may be too slow for comfort and then you kick in the auxiliary heat to give it a ‘boost’. Heat pumps also have a reverse flow (switch between A/C and heat) and emergency heat signal that would turn off the heat pump completely (with a auxiliary heat, emergency heat, regular heat/ac signal, reversing flow, fan, 24V line and neutral) I have 7 wires into my thermostat.

Modern thermostats may even use a secondary sensor that monitors outside temperature in some cases but things like Nest will use algorithms and weather information to monitor demand to tell whether to kick in the second stage (which is highly inefficient with heat pumps).

I am looking into HestiaPi but I realize I may have to create my own relay bank to run 5 signals and do things like monitor the outside temperatures to correctly engage.

Thank you Evi for all that valuable info!
The missing logic from where we are now to become a 2 or 3-stage is very easy to do. The most complicated part would be the many additional relays that need to fit on the already limited space PCB. Alternatively they could be wireless relays located at the other end of the control wires (at the furnace?) communicating over WiFi and MQTT. Would a solution like that be of interest?

Yes, I was thinking of something similar. Have L1 and N from the 24VAC over the wires and use the remaining wires as an I2C or other form of serial communication and one relay used for an emergency heat signal (which for my climate should be hardwired to a an “analog” anti-freeze protection circuit at ~10 degrees Celsius in case the RPi locks up due to a software bug).

If you want to keep it in the same package, thermostats aren’t required to use relays for switching, you could easily get away with using a triac which is significantly smaller and cheaper in package, if you don’t want to blow up your RPi, you could use a MOC306-series which would cost ~$0.50/channel in the BOM and switch any thermostat wire, has zero crossing and optocoupler built-in.

I’m not sure if using a wireless signal between the thermostat and the furnace is a good idea - the furnace here in the US is often all sorts of sheet metal somewhere in a basement, I would like to hide the controller panel within the furnace which is effectively a Faraday cage. If you’re having a poor wireless signal or interference, would it cycle the pump relay or just keep it engaged? Both options are potentially damaging to the system because heat pumps have minimum time and exterior temperature limits and gas systems may even present hazardous conditions.

The price wont be an issue. Anyone who may want 4-5 extra contacts won’t mind paying for the extra components if the circuit is tested and proven. My worries about moving to a phototriac solution is how global this solution will be. That is, “will it cover everybody’s electrical needs?”

Just ordered today a few SMD and Through-Hole MOC3063 for some initial testing. Are you saying that the GPIO can trigger MOC306x’s input that can drive directly a relay without additional protection, pull-up circuitry? Have you tried this before?

A post was split to a new topic: HestiaPi Touch US version